Eresbil arises in 1974 as a result of the need for repertoire to programme MUSIKASTE, a festival devoted to the dissemination of works by Basque composers, held annually in the town of Errenteria. The initiative to create a centre specially designed to collect the works of these composers came from José Luis Ansorena, director of the Andra Mari Choir and first director of Eresbil.

The institutionalisation of Eresbil began in 1977 with the creation of the Provincial Board of Trustees of the Archive, whose members were representatives of the local authorities and the Province of Gipuzkoa, in addition to those of the Andra Mari Choir, the founding association, and the Fraternity of the Capucins Brothers, who provided a place to install the archive in one of the ground floor premises of the Parish Church of Our Lady of Fatima.

In 1986, the Board of Trustees of ERESBIL - Basque Composers' Archive was created by decree of the Basque Government. From that moment on, the autonomous executive becomes a member of the board of trustees. In 2000, Jon Bagüés replaced José Luis Ansorena as director and, during his term of office, in 2002, the archive moved to its current headquarters, at which time the Fraternity of Capuchin Brothers left the board.

In 2011, its current legal configuration as a Foundation was established under the name of ERESBIL - Basque Music Archive. At present, the foundation's board of trustees is made up of: the Basque Government, which holds the presidency, the Provincial Council of Gipuzkoa, Errenteria Town Council and the Andra Mari Choir of Errenteria. In 2020, after the retirement of Jon Bagüés, Pello Leiñena took over as director. 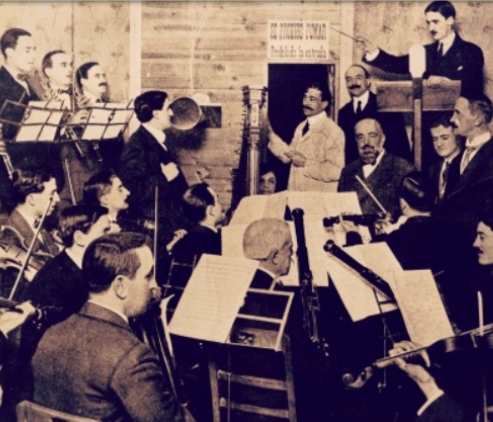 The aim of ERESBIL is the research, compilation, conservation and dissemination of Musical Heritage and, in particular, the production of Basque Composers. For this work, Eresbil has been recognised with various prizes and awards:

Within its scope of action, Eresbil works with the three main document organisation systems: the archival system for the description of its holdings and external collections, the library system for its own collection and the documentary system for the management of different resources.

This structure has led to the organization of several areas and sections:

Since 2009, Eresbil has expanded its field of activities to include an area devoted to dance, covering traditional as well as classical and contemporary styles.

Eresbil cooperates regularly with a number of institutions, both musical and documentary, among them: The Association of Basque-Navarrese Composers, the Association of Txistularis, the Federation of Choirs of the Basque Country, Eusko Ikaskuntza, Musikene, Mintzola, Ereintza, Dantzagune, the Archive of Music and Performing Arts of Navarre (AMAEN), Euskal Kultur Erakundea - Institut Culturel Basque and the INAEM's Centre for Documentation of Performing Arts and Music.